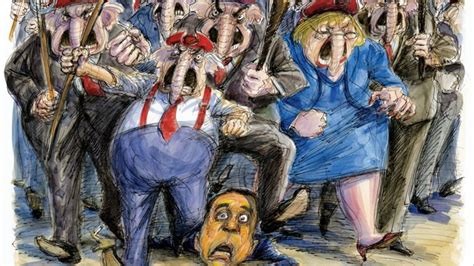 The Left and the Rule of Law

The recent election called on us to fight hard—and in the streets if necessary—to protect the rule of law and our formal processes of electoral democracy. Did I really just say that I wanted to protect the “rule of law”?

For the past four years many of us on the left have found ourselves in the awkward spot of standing up for a system we usually focus on criticizing. This piece shares some things the present moment helps us see about the nature of democracy. Those lessons are helpful for understanding how we relate to our deeply flawed current government, as well as what we should be aiming for as we dream of better futures.

We on the left who just demanded that every vote be counted, and that the system must be respected, didn’t do that because we naively believed our system was fair or just. We did so because we know that our electoral system is a framework that protects us against the abuses allowed by dictatorship. We know that if we didn’t fight for the formal system, limited as it is, we would allow the unleashing of even worse abuses of power.

As I argue in my book Challenging Power: Democracy and Accountability in a Fractured World, in order to build a just society, we need to challenge a variety of forms of power that are destructive to our lives. There are many ways that systems of unjust power dominate our lives and go unchecked by our formal political system. In addition to formal democracy we need to fight for substantive democracy, meaning that people actually have the power to make the decisions that impact their lives.

We leftists know in our bones that our political system is dominated by Wall Street interests, fossil fuel companies, systemic racism, patriarchy, and the banks. We have been making the case for years that our system of formal representative democracy hides deeper undemocratic realities.

What does it matter if I can elect politicians, if those politicians have no real power to reign in the police? If no money flows to support development in my neighborhood? Formal democracy can only deliver results that meet those needs once a critical mass is achieved and policy begins to shift. And getting the system to shift enough to meet those needs is incredibly difficult. Democracy is thwarted in a variety of ways. There is the power of money in politics. There are the limitations of the two party system. There is the electoral college. There is partisan gerrymandering. There are the ways that capitalism transcends the ability of a single government to constrain it. There are the ways that private control over mass media distort our culture. Each of these things keeps our formal political system from giving people real power over their lives.

Karl Marx was a critic of what he and his followers called bourgeois democracy. They argued that a formal electoral system looks fair on the surface, but because of the ways that it embeds the power of elite interests, it is actually a cover for a deeply undemocratic system. Modern “democratic” systems are formally but not substantively democratic: everyone gets a vote, but only the powerful actually get their way.

For some, that deep suspicion of the limits of formal democracy leads them to believe that it isn’t worth engaging with the government. Others, who hold an institutionalist theory of government, see it as a necessary terrain of struggle, given our current realities. Institutionalists agree that deep inequalities are entrenched in our political system, and the rules of the game are rigged against the interests of the people. But in contrast to the orthodox Marxist tradition, they argue that government is a sphere where people can fight for a more substantively democratic society. And they argue that that terrain of struggle is too important in our lives to cede it to those who would control it for elite interests.

One of my favorite expressions from the world of community organizing is that rules and laws are power frozen in time. In other words, government is a place of contest, where different interests vie for power. The power of money often dominates over the power of the people, unless the people organize and mobilize to shift the balance of power. In that view, government is like a game which is defined by its rules, but whose rules shift as a result of the wins and losses of the different players.

Government is a place where tremendous power is concentrated and deployed. In a formally democratic system, there are rules, or checks and balances, on how decision makers in the system can act. Unlike a dictatorship, where the leader can arbitrarily decide who lives and who dies, in a formal democracy, there are processes in place that determine how the game of power is to be played.

The great Italian Marxist philosopher Antonio Gramsci argued that governmental power rests on two main pillars: force and consent. Governments are systems which control and deploy the use of violence. Any yet it is quite difficult to keep a system of power in place solely on the basis of violence. And so, governmental systems also gain the consent of the governed through a variety of means. One is the idea that because a system is formally democratic, and rules with the input of the people, it is carrying out their wishes, and therefore it is legitimate. A major aspect of political organizing within a democratic society is the work of challenging the legitimacy of the game and using those challenges to shift the rules or shift the outcomes.

The rule of any governmental system is the result of years of struggle between different forces. And while it is true that control of government is easier for elite forces, it doesn’t follow that a government is illegitimate because the elite forces often have an upper hand. Formal democracy also limits the range of action of elite interests. And more popular interests often successfully mobilize and shift the game in ways that serve their interests.

In the US, Trump and his wealthy backers couldn’t simply do whatever they wanted while in power. They had the checks and balances of the system to deal with, and ultimately, the system was able to take him from power (we hope!) rather painlessly. At a minimum people on the left participated in defending the rule of law in this election because it was better than the alternative. It was better than having those elite interests, which had their hands on the levers of power, act in arbitrary ways unchecked by formal rules.

But our support for the idea of rule of law shouldn’t be just limited to its ability to limit the actions of a dictator. Perhaps more significantly, when people on the left imagine their ideal world, they often suppose that they can wield power without formal democracy. Marx’s co-author Fredrick Engels, wrote that once the proletariat came to power in a revolution, it would rule through a “dictatorship of the proletariat,” which would administer society in the interests of the working class for a period, until the state withered away. Most societies in which a Marxist group came to power through revolution, ended up with a political dictatorship which did not wither away. It became an entrenched form of elite power.

The checks and balances inherent in formal democracy are crucial for holding and containing power. That slow process of shifting the rules of the game to be able to yield just outcomes is important in a largely capitalist democracy such as the US. They are also crucial in any idealized post-capitalist future. Anarchists argue that we need to abolish the state. But whether we call what we would like to end up with a state or not, as long as we have large scale social systems in place, where decisions are made collectively on behalf of the social whole, there need to be systems in place to ensure that power is not concentrated and deployed in ways that are destructive. That requires systems of accountability.

We know that when people have power, they are able to transform the rules of the game in ways that can make them ever more able to concentrate more power. Any social system, capitalist, socialist, or anarchist, needs to have mechanisms in place to hold power to account. There need to be checks on arbitrary uses of power, and there need to be ways of resolving differences which are perceived as fair, and which are transparent.

Our work in the present situation then, is to protect the rule of law against threats to take hold of the power concentrated in our government and use it in arbitrary ways. We need to fight to change the rules such that our system is as democratic as possible. And we need to push that system to yield outcomes that substantively impact people’s ability to have power in their own lives.

Our system of formal democracy just survived a serious stress test. We learned about many cracks and fissures that need to be repaired before the next attempt at dictatorship comes along. And once the Democratic Party is in power, and we no longer need to worry about a dictatorial overthrow of our formal democratic system, we need to go back to fighting as hard as we can to make the system more substantively democratic, and to making the formal rules as fair as possible.

6 thoughts on “The Left and the Rule of Law”