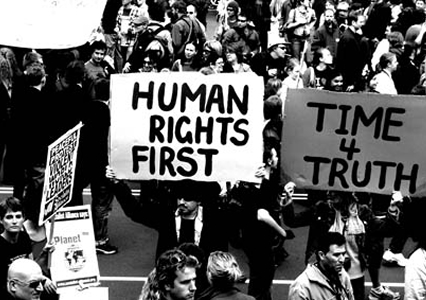 Making Rights Work: A Review of “The Human Rights Enterprise”

If education is a right, then how did we get that right? And if I have a right to an education, who has a duty to give it to me? Early theorists of rights, such as John Locke, argued that rights came from God. They also saw rights almost entirely in negative terms, as in, I have the right to be left alone. As a theorist of capitalism, Locke saw rights to property and rights to autonomous decision making as the most fundamental rights.

It wasn’t until the United Nations Declaration of Human Rights (UNDHR) was passed at the end of World War II that the idea of positive rights became widely accepted. The drafters of UNDHR expanded the notion of rights dramatically, Enshrined in it are rights to things like water, education and health care.

In The Human Rights Enterprise, authors William T. Armaline, Davita S. Glasberg and Bandana Purkayastha claim that while rights discourse is incredibly effective as a way to challenge power, most of the literature on human rights focuses on the “(1) formal legal approaches to defining and realizing human rights…. (2) the various legal and philosophical traditions that provide the foundations … [for human rights]; and (3) the relationships between state policy and politics at the national and international levels …”

What is missing, they argue, is a look at the real on-the-ground ways that claims to human rights actually function to challenge power. As political sociologists, they show how rights work as a dynamic process with citizens of the world and social movements, playing roles at least as important as governments in realizing our rights.

They define a “human rights enterprise” as:

The process through which human rights are defined and realized, including, but not limited to the legal instruments and regimes often authorized by international elites. The human rights enterprise includes both legal, statist approaches to defining and achieving rights through agreements among duty-bearing states, and social movement approaches that manifest as social struggles over power, resources, and political voice. The human rights enterprise offers a ways to conceptualize human rights as a terrain of social struggle, rather than a static, contingent legal construct.

They trace the real political choices that those challenging racism in the US in the 1950s faced when deciding how to frame their claims against the government. Should they ask for human rights or civil rights? Based on the UNDHR, human rights include both positive and negative rights, and that would have been a nice vehicle for carrying the claims that those in the movement had for challenging both economic as well as political disenfranchisement that were core parts of US racism.

The problem the movement faced, though, was that in the context of the Cold War, calls for positive rights were seen as “communist.” Civil rights — or the rights enshrined in the US Constitution, on the other hand — were deemed to be less controversial.

The Soviet Bloc had championed economic, social, and cultural human rights, while political and civil rights had been the hallmark of the Western nations. If the civil rights groups pushed for economic and social human rights, they would be branded communist. If they pushed for civil rights, they would be downplaying their demand for economic rights. Within this intersecting international and national context, groups like the NAACP chose, for pragmatic reasons, the frame of civil rights as the vehicle to demand racial justice.

With that decision, the movement was able to gain incredible traction in challenging the system of legal segregation that existed at that time in the US. But a negative consequence of that decision, which we can see in present forms of US racism, it that it left economic inequality untouched.

The point here is not to criticize the decision made by those civil right organizations, but rather, to understand the complex set of power dynamics that surround any attempt to gain rights and to use concepts of rights to challenge power.

The Human Right Enterprise comes at a time when there are big shifts in how politics functions globally. In the 20th century, the focus was generally on governments as the primary place to challenge power. Trying to control a national government was one of the main strategies of liberation movements.

In his book, The Good Citizen, Michael Schudson argues that beginning in the mid-20th century, there has been a shift in how democracy functions. As people increasingly advocate for things like safe products and an end to domestic violence, the wall between the personal and the political becomes less clear. Increasingly, people are working to advocate for their rights in areas that in previous times were not considered to be political issues. And these claims to rights are a significant way that people are challenging power.

Drawing heavily on Schudson’s work, in his book, the Life and Death of Democracy, John Keene argues that beginning around the middle of the 20th century, there was a proliferation of challenges to power, which existed outside the structures of formal representative democracy, working to challenge domination through an increasingly wide array of mechanisms.

[T]he years since 1945 have seen the invention of about a hundred different types of power-monitoring devices that never before existed within the world of democracy. These watchdog and guide-dog and barking-dog inventions are changing both the political geography and the political dynamics of many democracies, which no longer bear much resemblance to textbook models of representative democracy, which supposed that citizens’ needs are best championed through elected parliamentary representatives chosen by political parties.

We are in a period where power is increasingly understood to reside in transnational corporations, in complex social systems and in culture. It is larger, more slippery than forms of power that are seen to reside in governments. Claims to rights are one of the most powerful vehicles we have for packaging challenges to these diffuse forms of power. The Human Rights Enterprise claims that realizing the dreams that are embedded in rights requires that we look to complex social systems and to how challenges to power can work effectively.

A Right to Education

Armaline, Glasberg and Purkayastha have done helpful work showing us the complex process by which people express a grievance, give that grievance meaning by claiming that a right has been violated, and use those claims and pressures to transform the real ways that power operates.

Copyright, Truthout. May not be reprinted without permission.

Cynthia Kaaufman is the author of Getting Past Capitalism: History, Vision, Hope and Ideas for Action: Relevant Theory for Radical Change. She is the irector of the Vasconcellos Institute for Democracy in Action at De Anza College.